In 2009, the City of Milwaukee recognized the importance of the theatre as a vital point of the business corridor and called for its redevelopment in its west-side comprehensive plan. In keeping with that plan, the Burleigh Street Community Development Corporation (BSCDC) renewed its efforts in 2012 to bring the theater back online as a center for the arts (visual, musical, and performing), with space for studios, galleries, and offices.

Many neighborhood stakeholders and segments of the greater Milwaukee Community are involved in this collective effort. The BSCDC has assembled a diverse 20-member stakeholder workgroup consisting of community leaders, funders, fund-development professionals, artists, consultants, architects, and non-profit leaders. Together, they are developing creative solutions to the project’s different challenges. The BSCDC plans to create a new entity, the Sherman Park Arts Council, to act as a “booking agent” for the theater venue.

Because of its size and location, the Sherman Theatre building has the potential to do great things for the Sherman Park Neighborhood and surrounding area. In its prime, the theater was a commercial anchor for the area, and it may serve that purpose once again. Indeed, the building’s revitalization could act as a major catalyst for future investment and development in the area. It could also make real the dreams of neighborhood residents who have hoped the building might house a thriving theater once again. And it could become the home to both artists and artisans. It can do all of these things.

Most recently, the Sherman Theatre project has taken some major steps towards becoming a reality. In 2014, Quroum Architects, Inc. lent their talents and produced a report and series of artistic renderings imagining what a redeveloped theatre could look like.

Also in 2014, the University Economic Development Association feaatured the theatre in a lab as part of its annual summit, focusing on the assets and challenges of the project and offering ideas for next steps. Meanwhile, Doors Open Milwaukee included the theatre on a public tour of historically and architecturally significant buildings around the city.

Get involved to make our dream of a new Sherman Theatre a reality.

Learn more the Sherman Park neighborhood and the organization behind the theatre project. 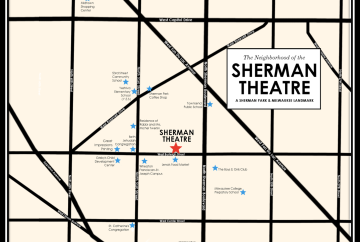